The ceremonial meeting and promotion to knighthood takes place on 05.12. 2020 in the Mirror Chapel of the Prague Clementine from 5 pm
When dressing the knights, dress code is needed, and in the case of the current knights the dress and order decoration
Attention, attention more information and documents is in the Czech version and please use the google translator

The Order of Constantine is considered to be historically the first Christian knightly order in the world, and its founding is directly attributed to the person of the Roman Emperor St. Constantine the Great (Flavius Valerius Constantinus) born in the third century. Since 306 AD he was Roman emperor and until his death an unmistakable ruler of the whole Roman Empire.

Constantine contributed to the change of the religious policy of the Roman Empire and his activities were of fundamental importance not only for Christianity, but also for the history of the late antiquity and European civilization. Konstantin won the battle of the Milvian Bridge on the 28th of October 312, and personally believed that the Christian God had helped to win. Subsequently in the year 313, he issued the Edict of Milan which equated Christianity with the Roman cult and ended the persecution of Christians and guaranteed religious freedom to all the inhabitants of the Empire. Constantine broadly supported Christianity and by the year 325 he convened the first ecumenical council in the city of Nicaea. The Christians endowed him with the nickname "Great" for these deeds, and was declared holy by the eastern part of the Christian Church.

According to old chronicles, in 312, after the victory battle over the adversary Maxentius, Emperor Constantine the Great established the first Christian knightly order bearing his name. The Order fulfilled its military and spiritual role in defending Christianity and at the same time acted as a personal guard to protect the Emperor. 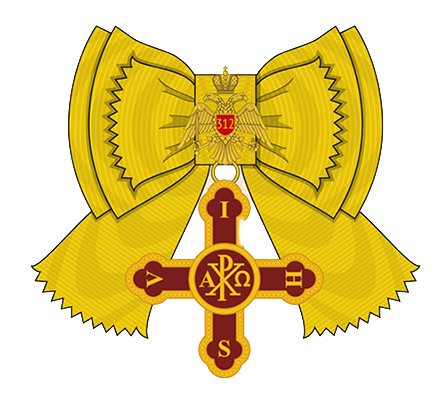 In the following centuries the Order served on the basis of the same original principles, which were subsequently confirmed by the Byzantine emperor Alexios Komnenos in 1190. After the fall of Constantinople in 1453, the Order was divided into two separate entities. Constantine XI handed down secular power and the imperial crown to the head of the patriarch before the fall of Constantinople, and since then all Constantinopolitan Orthodox patriarchs have been ethnarchs with spiritual and secular power. The legitimacy of the Order of St. Constantine the Great rests on the shoulders of the Orthodox Church. The first knightly order was also of great importance for Rome, and therefore Pope Nicholas V confirmed the Order in Western Europe as the Roman Catholic Constantine Order of St. George. This created two separate Orders falling under the jurisdiction of the western and eastern parts of the Christian Church.

There is only one Christianity, with the Western and Eastern parts of the Church being perceived as the right and left lungs of Christianity.

Both Orders were unchanged until the beginning of the 20th century. In the post-war- changed Europe, both Orders had to adapt to modern times. The Roman Catholic faction of the Order is still the family order of the dynastic Bourbon family. On 29 May 1953, the Orthodox Constantine Order was granted registration in Switzerland, when it was registered under Swiss law as a knighthood association for the protection of Christianity. The Order was devoted to charitable work in the 50s to 70s not only in Europe but also in Africa. On May 12, 1970, the ecclesiastical authority of His Beatitude Nicholas VI. Pope and Patriarch of the Church of Alexandria, founded by the Apostle Mark, recognized the Order of Constantine the Great and took the Order under his patronage. In 1982, the Order of Constantine was promoted to the "Guard of Honour of the Apostolic Throne" of Alexandria of the Patriarchs of Alexandria and All Africa in concert with the Holy Synod. The knightly Order of St. Constantine the Great was active in Western Europe; in Central and Eastern Europe, its activity was restored after the fall of totalitarian communism after 1989, when the restoration of the Holy Communion of St. Constantine commenced in the post-communist countries - in the Czech Republic, the Slovak Republic, Poland, Bulgaria, Hungary, Russia and Ukraine. The first state where the restoration of the Order (at the instigation of the Viennese Czechs) started was the Czech Republic. Subsequently, in 1993, 9 Czechs were admitted under the German exarchate in the Lower Austrian Stift Göttweig (near Furth). Two other Czechs were admitted in Bad Wimpfen in Baden-Württemberg on the 2nd and 4th of September 1994, and immediately in the following month the first knighting of the Order in the Czech Republic was held in Velehrad where 30 expectants from the countries of Central and Eastern Europe, of which 21 were Czechs, were admitted to the Order on the 23rd and 24th of October 1994. The current members of the leadership of Internationalis Ordo Sancti Constantini Magni have played an important role in the establishment of branches of the Order in Central and Eastern Europe. On 30 March 1995, the Ministry of the Interior of the Czech Republic admitted the registration of the Order of Constantine the Great as a civic association. Gradually, branches of the Order were established in Poland (14.12.1994), Russia (12.2.1996), Hungary (1995), Bulgaria (1996), Ukraine (1995) and Slovakia (31.8.1995). Thanks to the registration of the International Headquarters of the Order in the Czech Republic, on February 20, 1998, pursuant to Act No. 116/85 Coll. (the Act on International Non-Governmental Organizations), the headquarters of the Order were moved with the support of the successor of the Russian throne to the territory of Bohemia. The western European Order has maintained its worldwide ecclesiastical legitimacy in relation to the patriarchate of Alexandria and All Africa. The Central and Eastern European faction of the Order received recognition and the patronage of the local autokephalic Orthodox Church in the Czech Republic and Slovakia (two months after the registration as an international non-governmental organization) on 24 April 1998 from the Metropolitan of the Czech Lands and Slovakia, His Beatitude Dorotheus, Archbishop of Prague. Thus, the Central and Eastern faction of the Order of Constantine returned in 1998, after nearly 550 years, where it belongs to historically, under the highest representative of the Orthodox Christians in the world, the Constantinople Patriarch who since 1453 has had the legitimate right to confirm and acknowledge Constantine's Order as an autonomous military ecclesiastical entity of the Eastern Part of the Christian Church in unity with other local autokephalic churches. This new tradition was followed by the new Metropolitan and Archbishop of Prague, His Beatitude Doc. ThDr. Vladyka Kryštof, Ph.D., when in Prague on 13 March 2006 he confirmed the knightly Order of St. Constantine and Helena as the STAUROPEGIC orthodox brotherhood of the faithful. In addition to the spiritual protection of the Eastern Orthodox Sovereign Patriarchate and all of the above-mentioned national statutes (international branches of the Order in individual countries), including the International Headquarters (established as an international non-governmental organization), the Order is registered with the United Nations Economic and Social Section. At present, the Order operates in 36 countries worldwide under the name International Equester Ordo Sancti Constantini Magni (et Helena).

The Order defends the spiritual and moral values of ancient times that are very much absent in today's modern society. The Order is thus a protector of European culture and mentality that has been formed in Europe under the influence of the Church and the local land nobility in two thousand years.

The ceremonial meeting and promotion to knighthood takes place on 05.12. 2020 in the Mirror Chapel of the Prague Clementine from 5 pm

When dressing the knights, dress code is needed, and in the case of the current knights the dress and order decoration